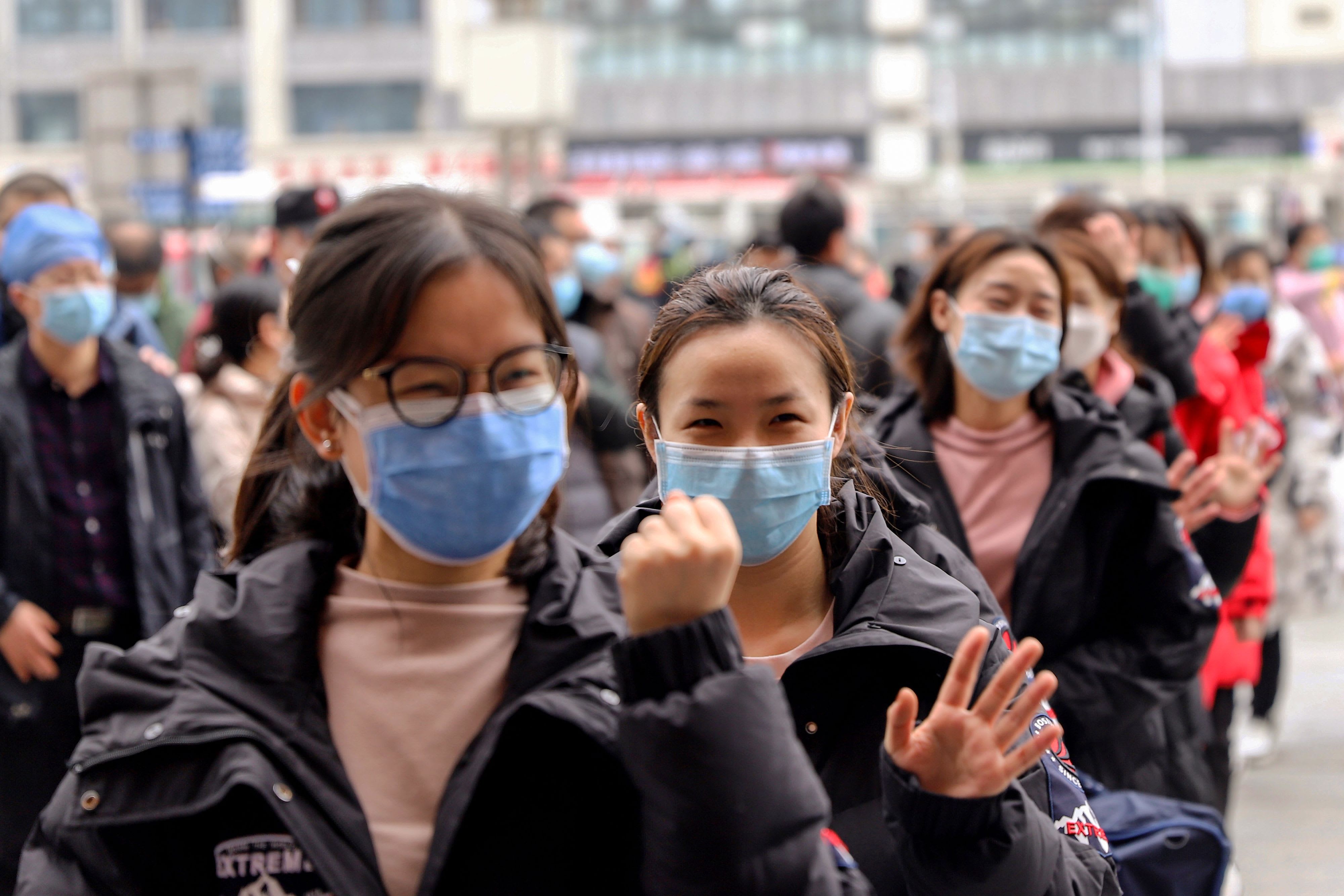 A girl wearing a face mask plays on her scooter at a park in Beijing on February 15, 2020.

This is a live blog. Please check back for updates.

All times below are in Beijing time.

Japan’s health ministry said 70 more people on board the Diamond Princess cruise ship have tested positive for the new coronavirus. This brings the total cases stemming from the cruise ship to 355 out of 1,219 people tested, the ministry said.

The Hong Kong government will arrange a chartered flight for its residents on board the quarantined Diamond Princess cruise ship, according to a spokesman for the city’s Security Bureau.

The government, citing data from the cruise operator, said there are about 330 Hong Kong residents on board — 260 hold a passport from the special administrative region, while 70 have foreign passports.

The flight will bring the residents back as soon as they are cleared to disembark the ship, Hong Kong said. The people will stay at a quarantine facility for 14 days after flying back to the city, the government said.

China has dispatched more than 25,000 health workers to help Hubei as of Feb. 14, as the central Chinese province seeks to contain the spread of the new coronavirus, state-owned Xinhua reported, citing a senior official at the National Health Commission.

“The total number of medical workers has far exceeded that for rescue in the 2008 Wenchuan earthquake, and we did it at a much faster speed,” Wang Hesheng, deputy head of the commission, reportedly said. He was referring to a magnitude 8 earthquake in May 2008 that hit southwest China’s Sichuan Province, that killed an estimated 70,000 to 80,000 people.

Wang said that of the 25,633 medical workers sent to Hubei, about 20,000 are now working in Wuhan city — where the virus is thought to have first emerged. The official said that number does not include medical staff sent by the military, according to Xinhua.

10:13 am: Cruise ship operator awaits further tests for passenger said to have tested positive in Malaysia

The cruise ship operator for MS Westerdam, the ship that docked in Cambodia last Thursday, said it was waiting on results from a new test to see if a passenger who flew to Malaysia had the virus.

Holland America Line said in a statement: “While the first results have been reported, they are preliminary at this point and we are awaiting secondary testing for confirmation.”

Malaysian health authorities said the 83-year-old American woman flew from Cambodia to Malaysia — with 144 others from the ship — on Friday, according to Reuters.

Medical staff gesturing as they leave for Wuhan in Nanchang, China’s central Jiangxi province on February 13, 2020.

9:31 am: Test kits that show results in 15 minutes are reportedly being developed in China

Chinese researchers have reportedly developed new test kits for COVID-19 that will cut short the testing time, according to a report by state-media Xinhua.

The State Key Laboratory of Respiratory Disease said on social media that the new kits require a drop of blood for testing, and results can be shown in 15 minutes.

However, Xinhua pointed out that the new testing method by the Guangdong-based lab “has not yet received consensus in the testing industry.”

China’s National Health Commission reported that there were 2,009 new confirmed cases and 142 additional deaths as of Feb. 15.

That brings the total number of cases in mainland China to 68,500, and the total deaths so far to 1,665, according the latest statistics from the commission released Sunday.

A total of 9,419 have recovered and were discharged, the country’s health commision said.

There are now 56,249 known cases of the respiratory virus in Hubei, which has killed 1,596 people in the province alone. Hubei is the center of the epidemic, and has accounted for most of the cases and deaths so far.

All times below are in Eastern time.

Toyota will resume production at three of its four primary auto plants in China on Monday. The company had initially planned to restart production on Feb.3, but was delayed because of the virus outbreak. — Newburger

The Diamond Princess cruise ship that is in quarantine in Japan confirmed 67 new cases of the virus on board. The ship was put under quarantine last week in Yokohama with about 3,700 people on board.

American passengers aboard the ship will be evacuated on Sunday with chartered aircraft, according to the U.S. Embassy in Tokyo. There are 400 U.S. citizens on board and at least 40 Americans who were infected have been taken off the ship for treatment. Those who are evacuated will undergo 14 days of quarantine once they reach the U.S. — Newburger

Chinese President Xi Jinping issued internal orders regarding the virus outbreak roughly two weeks before his first public statements on the epidemic, according to a newly published speech on Saturday in the Qiushi Journal, the Communist Party’s top publication.

China’s release of the speech is an apparent effort to mitigate public anger over the handling of the outbreak, and show that Xi has led the battle against the epidemic — including quarantining millions of people in Hubei, the province at the epicenter of the outbreak.

Xi gave the speech on Feb 3, about the time when the virus was becoming a national crisis. — Newburger

Read CNBC’s coverage from the U.S. overnight: WHO calls on world leaders to ‘stop stigma and hate’ surrounding coronavirus outbreak

US coronavirus deaths to surpass 100,000 by June 1, CDC director says

8 affirmations for every day

Why You Should Read for Pleasure